The Wyckoff method is a popular technique for analysing market trends, finding reversals, and making informed trading decisions. In this article, we’ll provide an overview of this decades-old system and explain how you may apply it to your strategy.

What Is the Wyckoff Method?

The Wyckoff method is a type of technical analysis developed in the early 20th century by Richard D. Wyckoff, a renowned stock market trader and analyst. The method is based on the belief that markets are driven by fundamental supply and demand forces and that these forces can be traded through repeatable patterns.

The Wyckoff methodology offers traders a comprehensive system that gives them all the tools they need to create a potentially successful trading strategy. This system includes the relationship between price and volume, the identification of market structure, and the role liquidity plays in financial markets. 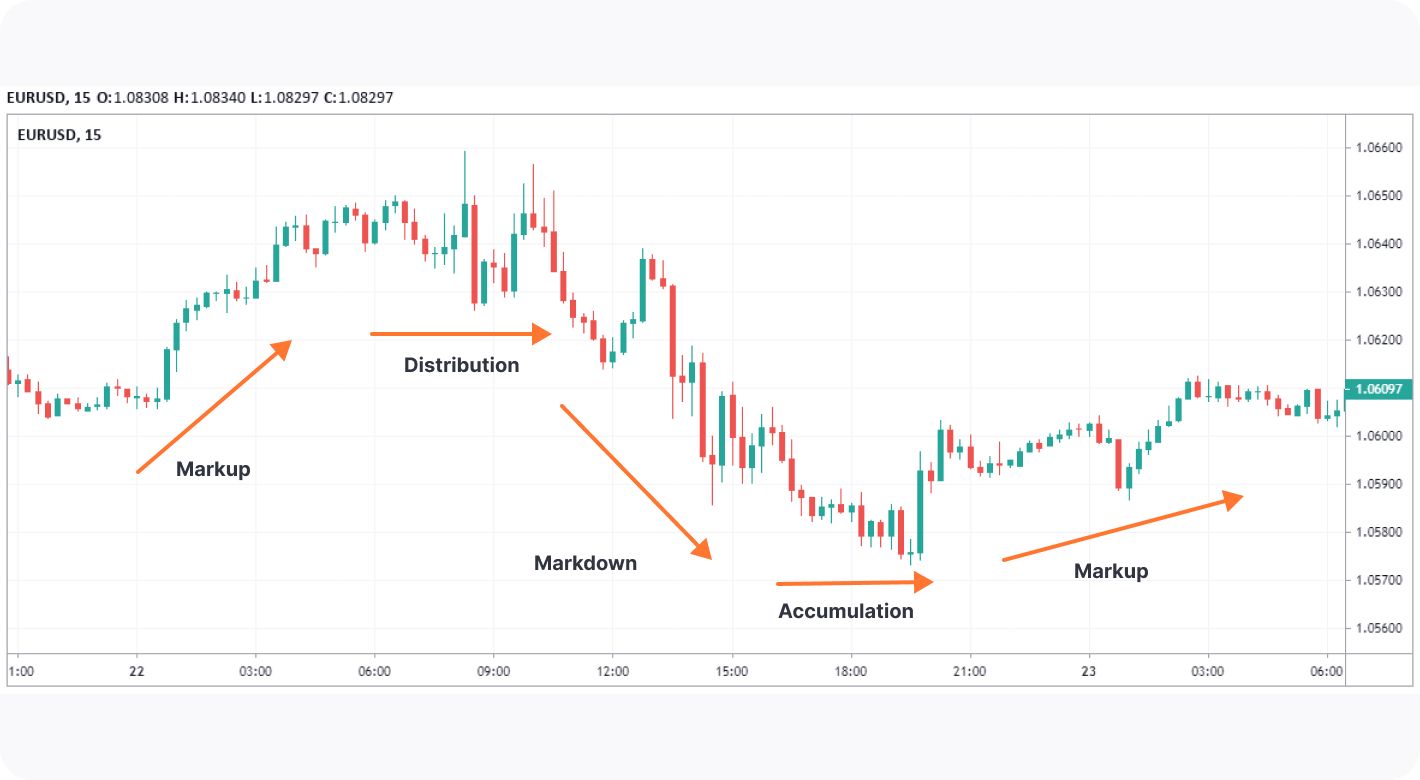 The Wyckoff methodology frames the markets in four repeated phases. These are accumulations, markups, distributions, and markdowns.

Most often seen in ranges, accumulations represent areas where large players are building up a position to go long before the market reveals its true direction to other traders.

Once they hold a large enough position, these players start to bid the price up, encouraging other traders to jump in and push the price up further. This self-reinforcing cycle of more and more traders getting involved causes the price to shoot up out of the range and begin an uptrend. Note that a markup may have multiple re-accumulations where it pauses and consolidates before breaking higher.

Once the price reaches its target and the buying pressure from other traders subsides, the big players will begin to distribute (sell) their positions while building up shorts. This will, again, look like a range before a sharp move down.

This sharp move down is known as the markdown. It’s essentially the opposite of a markup: financial institutions push the price down and encourage traders to enter short positions to begin a downtrend. Like markups, there are also phases of redistribution that consolidate before moving lower.

Why the Wyckoff Model Works

To fill big trades, financial institutions require a counterparty like everyone else, i.e., a seller if they want to buy, and vice versa. But when you’re trading billions of dollars at any one time, how do you fill your order at an optimal price without slippage?

Enter stop losses and breakout trades. These “smart money” players know that there are stop losses above and below equal highs/lows, trendlines, and support and resistance levels that may facilitate their trades. There are also traders waiting to get in on the breakout.

They realise there is liquidity above and below these levels ready to be used to fill their orders. By pushing prices past these levels and playing on retail traders' emotions, they may get in without risking millions of dollars trying to get their orders filled at suboptimal prices. This is the fundamental idea behind the Wyckoff theory in forex, commodities, crypto, stocks, and more.

There are a few fundamental principles of the Wyckoff methodology that are critical to your understanding: the Composite Man and the three laws.

The Composite Man is the idea that traders should imagine that just one party controls the markets and that they should study them as such. He is, in essence, the “smart money.” Wyckoff believed that the Composite Man carefully plans and executes his trades, encouraging buyers (or sellers) only after he has accumulated a sizable position.

The Law of Supply and Demand

The Law of Cause and Effect

This law states that the dynamics of supply and demand are determined by specific Wyckoff events (the cause), like accumulations and distributions. It also says that the effect, or the price movements, are proportional to the cause. An accumulation that occurs on the daily timeframe will produce a much more significant effect than one on the 1 minute, for instance.

The Law of Effort vs. Results

This law says that price movements are a result of effort, characterised by volume. If a bullish trend is supported by strong volume, it will likely continue. Moreover, if a trading range has a high volume but remains consolidated (a minor result), a potential trend reversal could be about to start.

While this might sound like a lot to take in, it’s relatively easy to spot using the time-tested Wyckoff chart patterns. If you want to test your own understanding, you may use the TickTrader terminal with us at FXOpen. It’s completely free to use, with no signup required if you don’t plan to open trades but just want to examine what patterns look like on the chart.

Note that Wyckoff accumulations and distributions are practically identical, just flipped upside down. The key concepts, points, and phases are all the same. 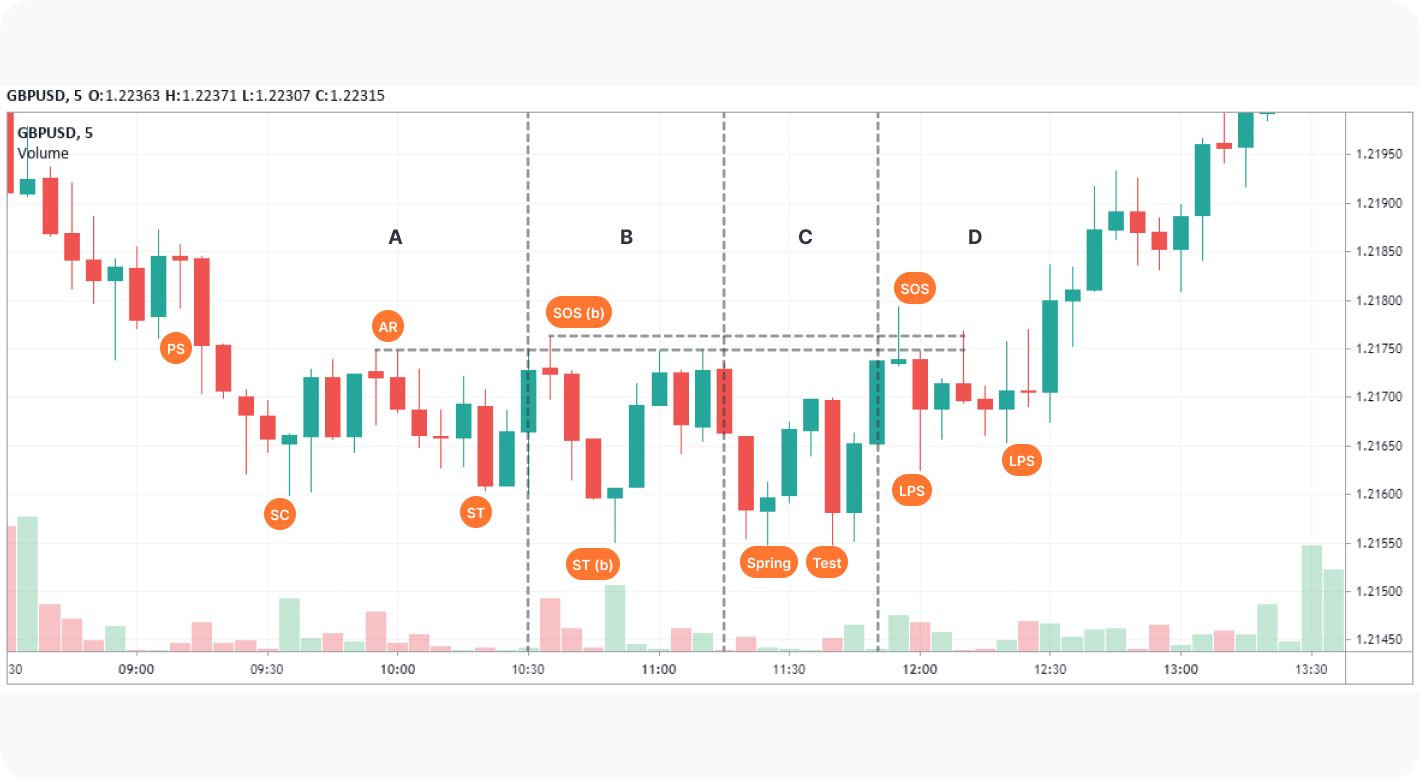 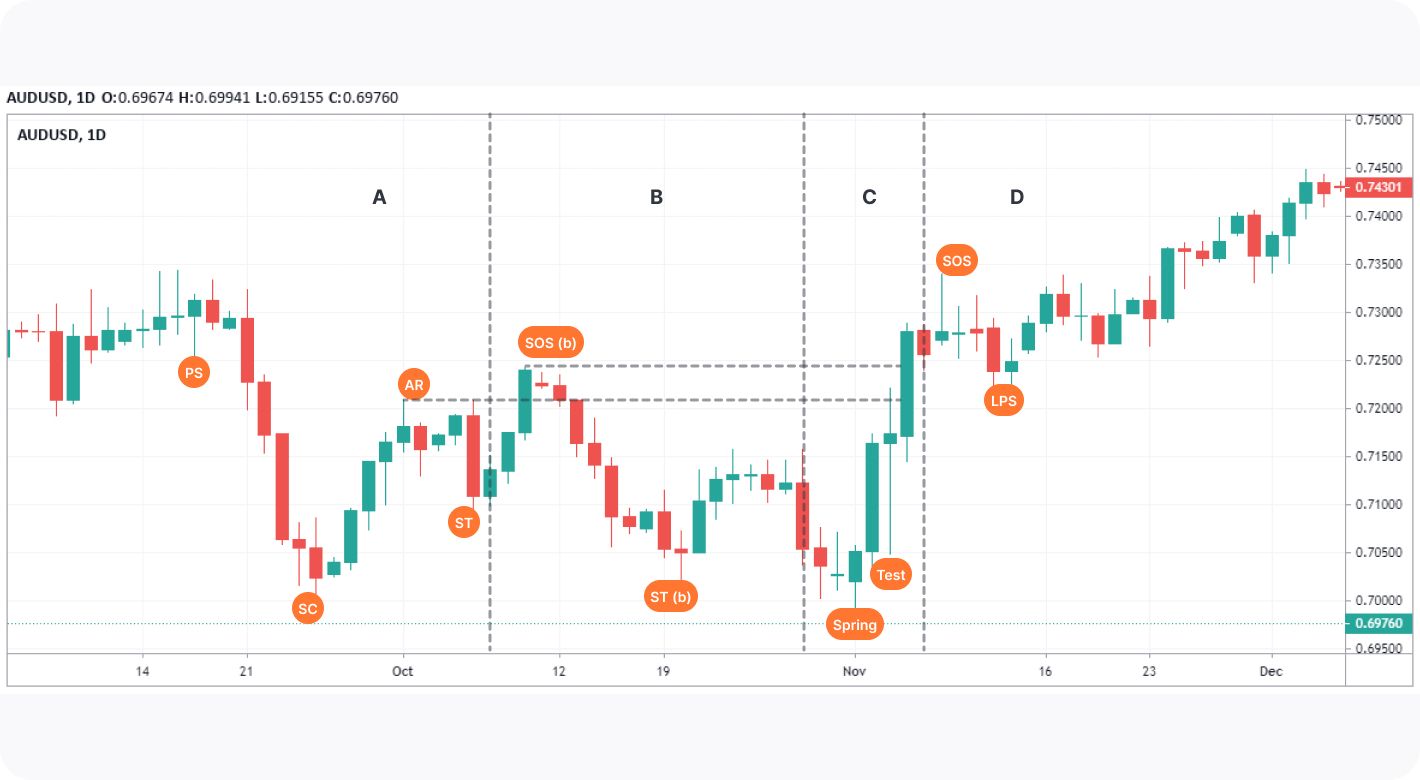 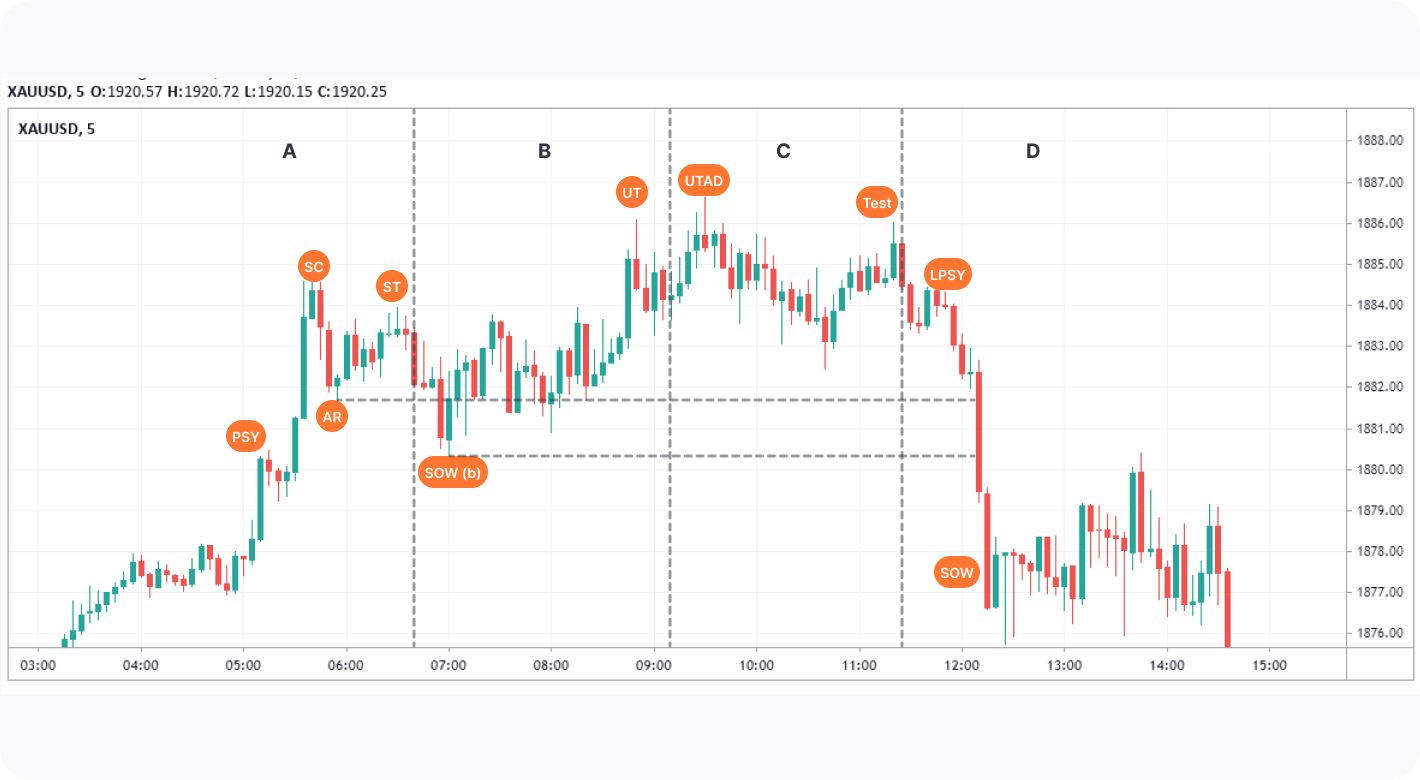 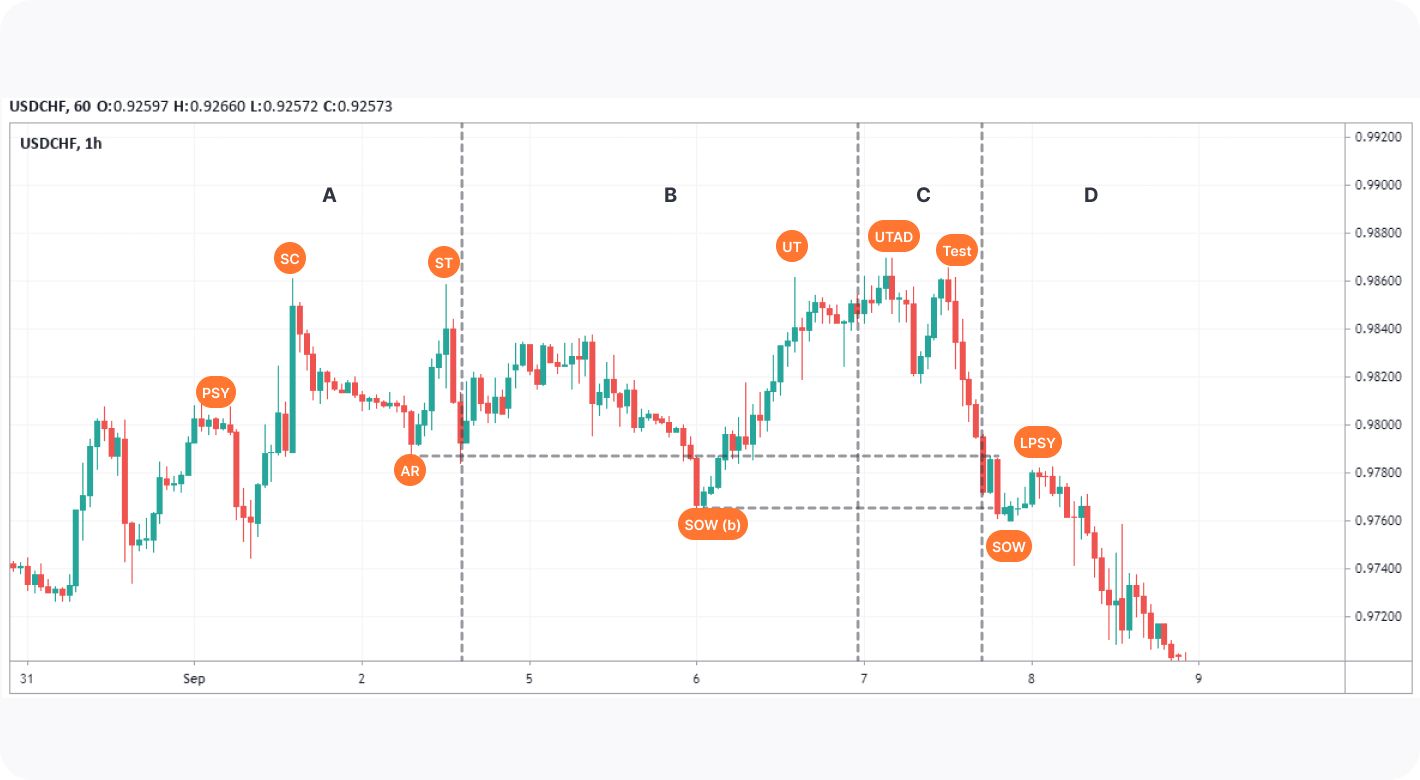 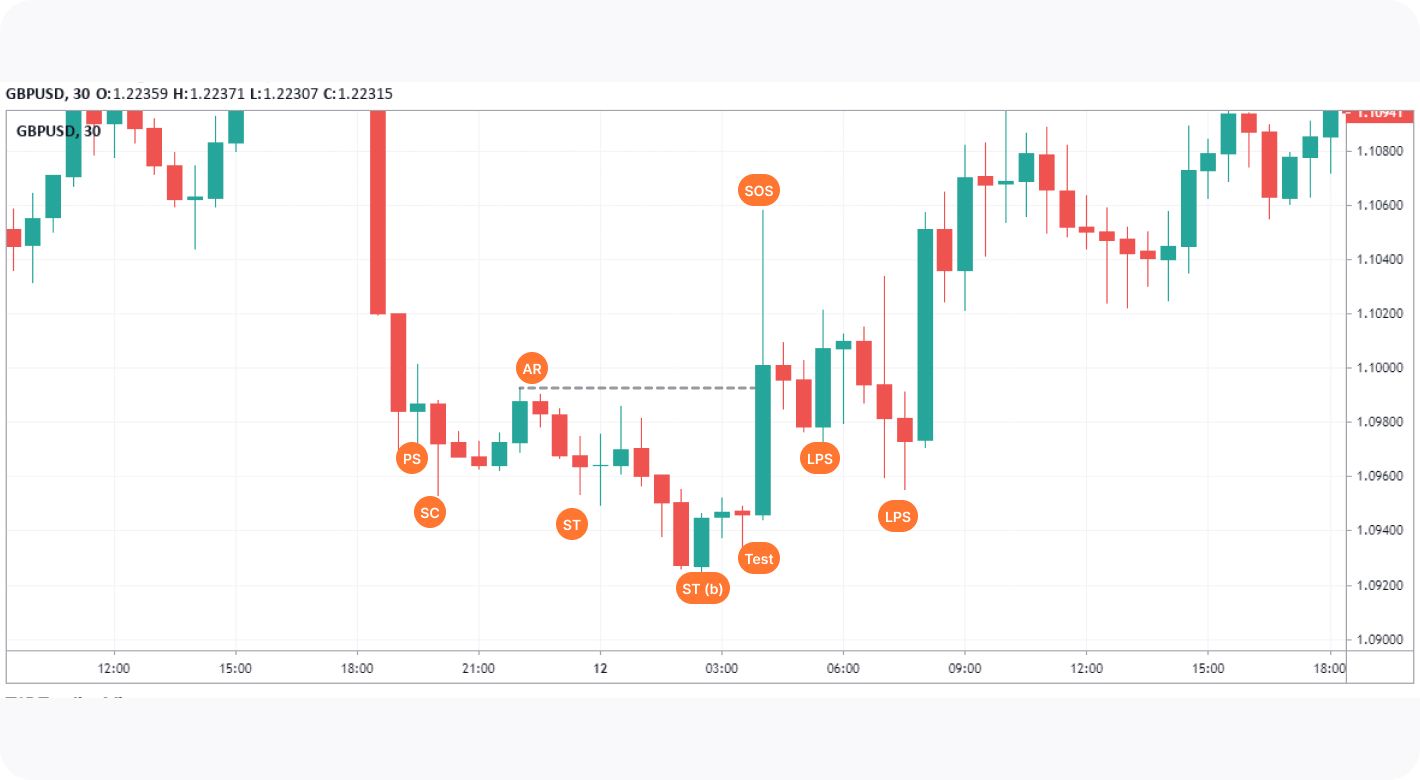 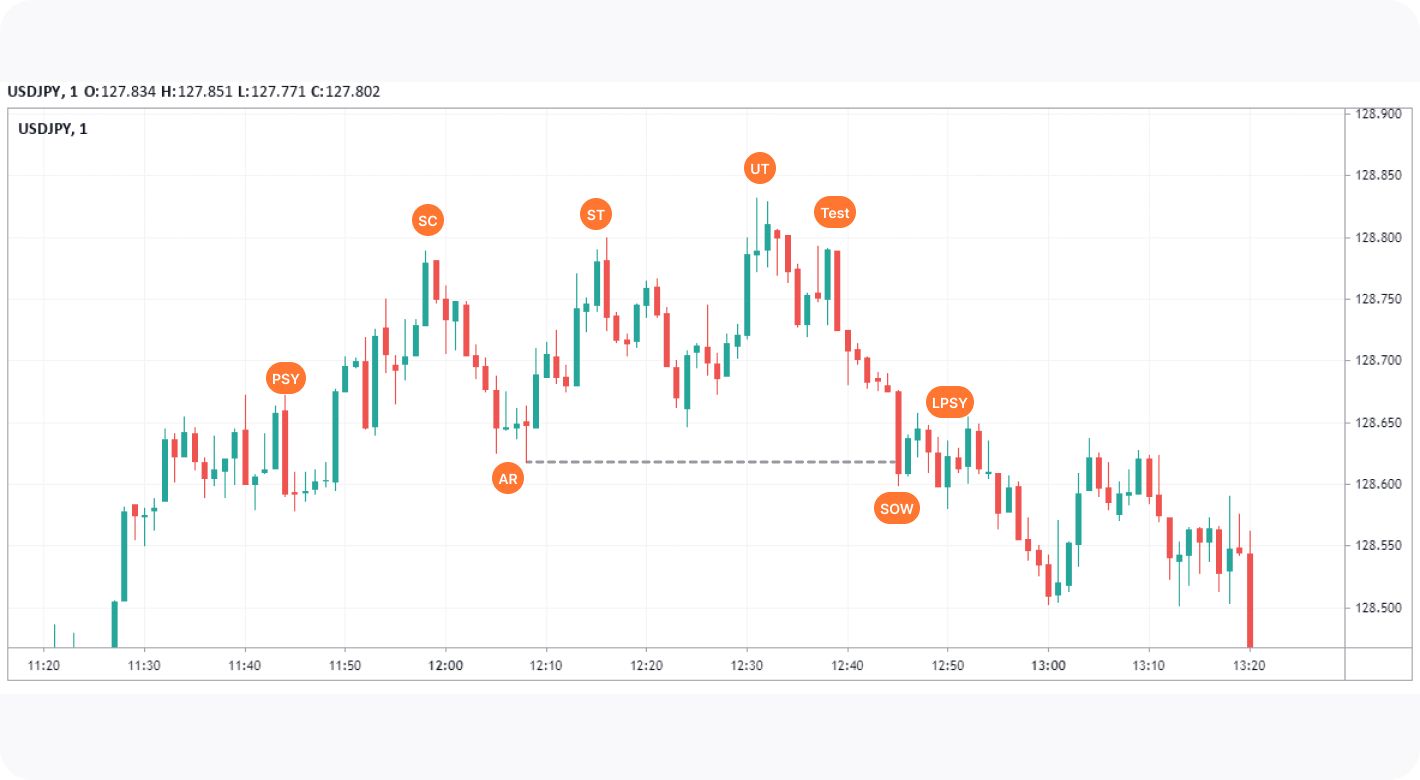 Type 2 Wyckoff schematics have all of the same ingredients, just without a Spring or UTAD. How do you know if what you’re looking at is a Type 2 schematic? Just wait for the SOS or SOW to occur. If you have just a single ST and an ST(b), or an ST and UT, and the markup or markdown begins, you know it’s a Type 2. This is seen in the Wyckoff graph above. Both can be traded in the same ways as a Type 1.

Luckily for us, Wyckoff developed a five-step strategy for using his methodology. This could be used to create your own Wyckoff forex trading strategy.

Does the Wyckoff Method Work?

Despite nearly being a century old, Wyckoff’s logic in forex trading has helped traders around the world to develop trading strategies. It may form the basis of an effective strategy when combined with other types of technical analysis, such as harmonic patterns, indicators, and support/resistance. You may consider opening an FXOpen account today to start putting your knowledge to work.

This site uses cookies to store data. By continuing to use the site, you agree to work with these files.