A Comprehensive Guide to Trading a Doji Candle

Doji is a technical analysis tool reflecting the uncertainties of buyers and sellers. This candle doesn’t provide any trading signals unless it’s used with other patterns or technical indicators. Why do traders look for Dojis when trading stocks, commodities, and currencies? Keep reading this FXOpen tutorial to discover the unique features of this pattern.

What Is a Doji Candle?

The Doji is a pattern that consists of a single candle. It looks very different from other candlesticks. Therefore, traders of any level of experience can determine it on a price chart. The Doji has a tiny body comprising equal or almost equal open and close prices and long shadows. What does a Doji candlestick mean? A short body informs traders about the indecision of buyers and sellers as none of them can drive the market. The longer the shadows, the more significant the market uncertainties.

How to Spot a Doji Candle

The most common Doji candles are long-legged, Dragonfly, Gravestone, and four price. 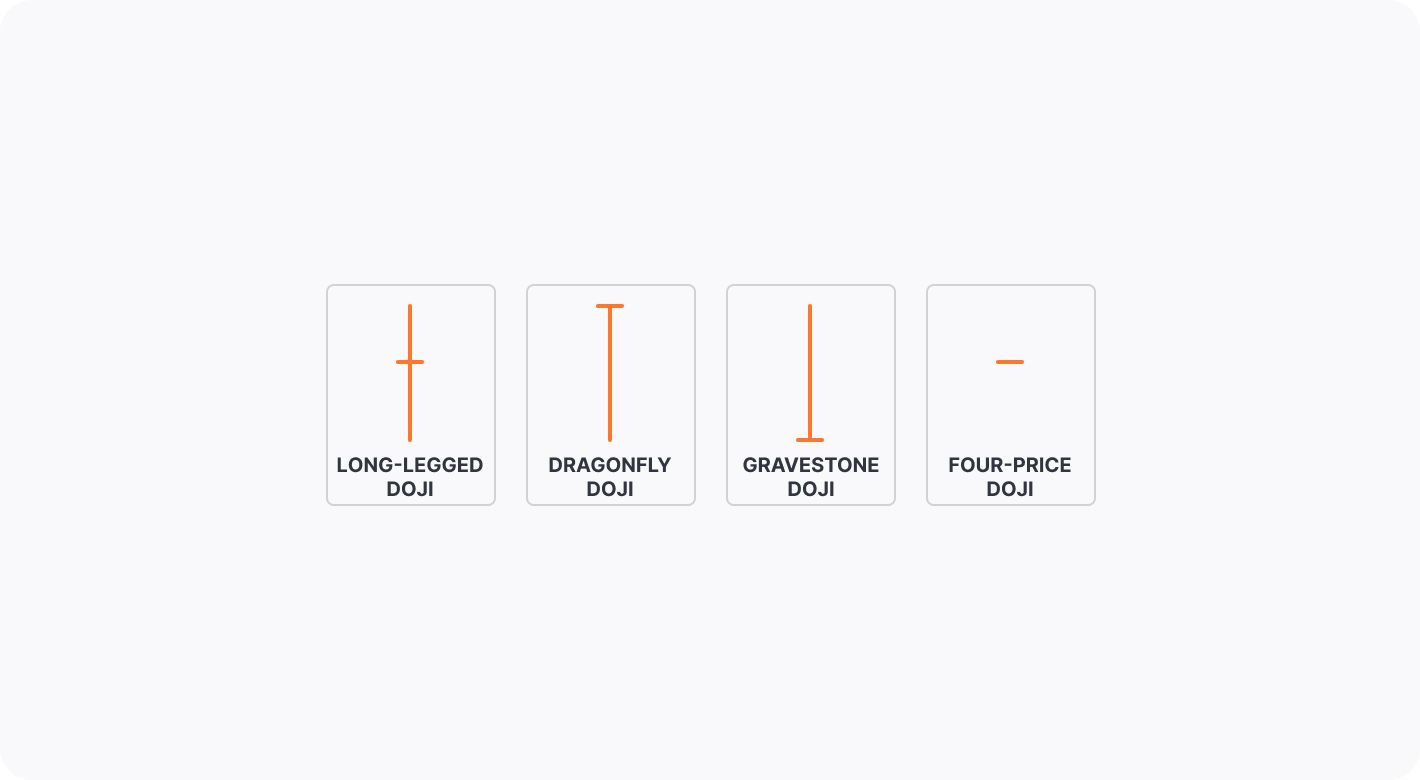 All these types can be found on the TickTrader platform.

How to Distinguish Between a Spinning Top and a Doji

How to Trade with a Doji Candle

Traders may be caught in a trap if they rely solely on a Doji candle, meaning it’s usually effective only when combined with other technical tools. These are some basic rules you may apply when reading its signals:

Trend strength. The first thing traders consider is the trend. Doji candles can forecast the continuation and reversal of a trend. If the market rises for an extended period, a newly formed Doji may be a sign of bull exhaustion. Conversely, appearing in a prolonged downtrend, it may signal an upcoming trend reversal. If the candle is visible in a newly formed trend, the trend will likely continue.

Broad picture. If you find a Doji setup, it may be helpful to look for additional signals of other patterns or technical indicators. To confirm reversals, traders usually implement oscillators such as MACD, Stochastic, and RSI, which reflect overbought/oversold conditions, and indicators such as Average Directional Index that reflect the trend strength. Support and resistance levels can also be helpful when identifying trend reversals. The lack of a reversal confirmation may be a sign of a trend continuation.

Check the examples of Forex trading with Doji patterns.

Dragonfly Doji at the End of a Downtrend

A Dragonfly Doji can appear in up- and downtrends. However, if it’s in a downtrend, the reversal potential is higher. 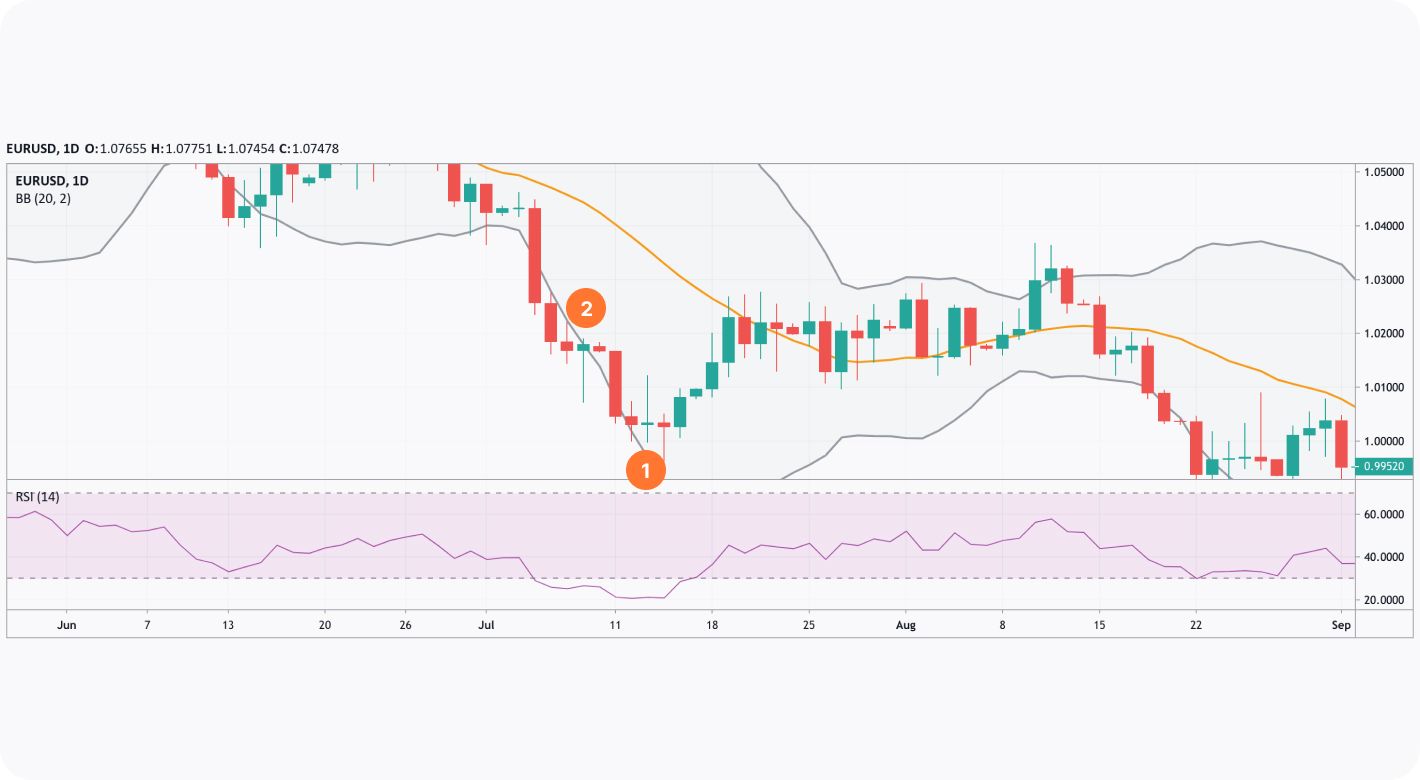 On the chart above, the EUR/USD pair formed a spinning top and two Forex Doji candlesticks, a Gravestone and a Dragonfly at the end of a downtrend (1). At that time, the RSI indicator was in the oversold area, and the pair was near the lower band of the Bollinger Bands indicator. After, the market turned around.

However, if you have noticed, there was another Dragonfly Doji several candles ahead (2). Then, the RSI indicator was also in the oversold area, and the price was near the lower band of the Bollinger Bands indicator. This is another confirmation that this pattern doesn’t provide reversal signals but reflects market uncertainties that may result in a trend change.

You could wait for the RSI to leave the oversold zone to avoid a losing buy trade.

The previous example can be used to explain another standard theory that a more significant number of Dojis results in a more reliable signal. However, while the last example confirms the theory, another refutes it. 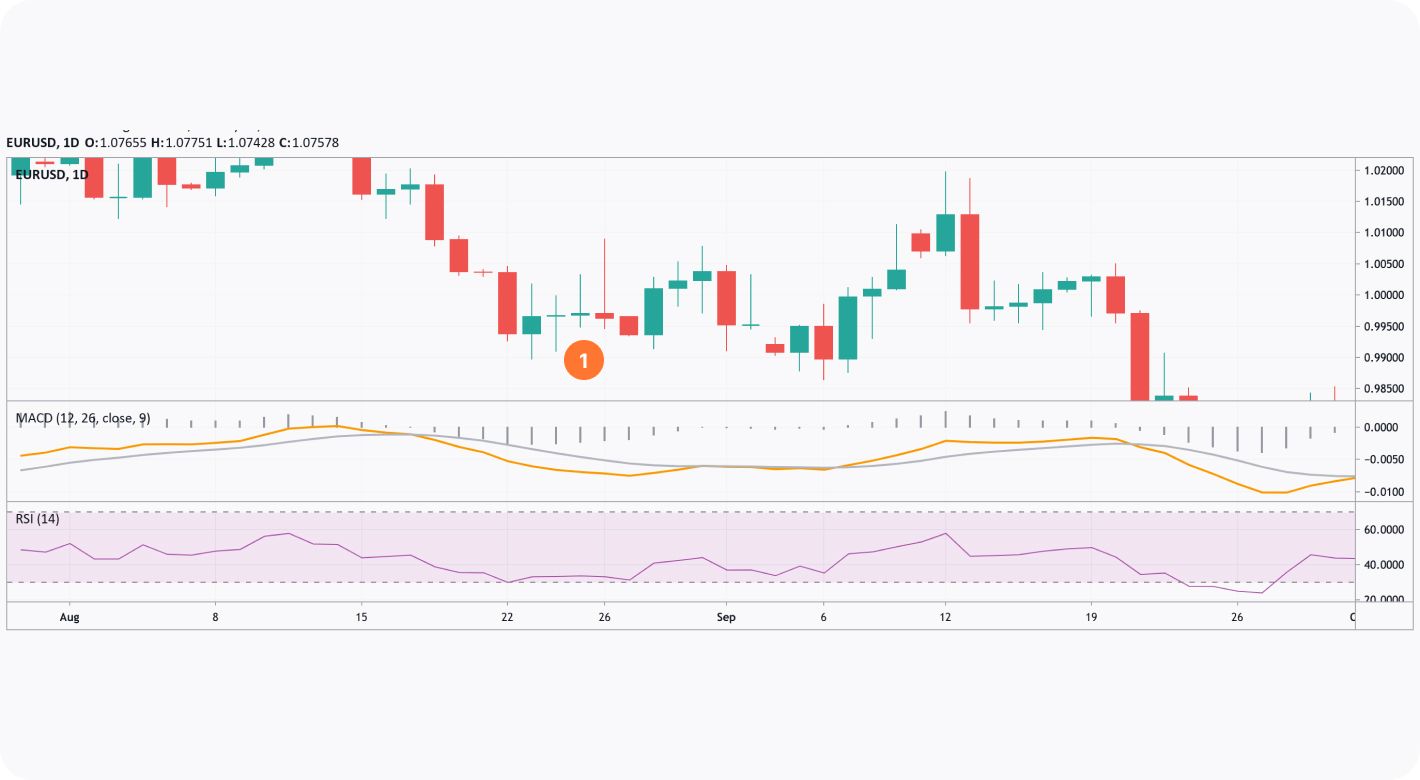 Is a Doji Candle Helpful?

A Doji isn't a common instrument to predict market direction. Still, it may be used as a barometer of the market sentiment that may lead to particular price movements. The theory suggests that traders do comprehensive analysis and combine Dojis with other technical tools before they enter or exit the market. To practice finding a Doji pattern in stocks, commodities, or currency markets, you may consider opening an FXOpen account.