How to Trade with a Gartley Pattern

The Gartley is a trend continuation pattern, meaning that after it completes, the trend is likely to continue with greater momentum. It has the potential to be found in any market, including Forex, stocks, cryptocurrencies, and commodities. On the other hand, it may appear on any timeframe, so it's suitable for any style of trading — from swing to day trading, and even scalping.

In this FXOpen post, we talk about the history of the Gartley pattern, its relation to the ABCD formation, and ways to identify and use it in trading.

What Is the Gartley Pattern?

The Gartley is a harmonic pattern. It is named after H.M. Gartley, who first introduced it in 1930 in his book “Profits in the Stock Market.” This is the most common harmonic chart setup used in stock, cryptocurrency, commodity, and Forex trading.

It’s a well-known fact that the Gartley pattern’s indicators are Fibonacci retracement and extension. The formation is based on Fibonacci numbers and ratios. Interestingly, Gartley didn’t use the Fibonacci levels to identify the setup. Larry Pesavento later introduced them in his book “Fibonacci Ratios with Pattern Recognition” in order to make a distinction between all harmonic formations.

Gartley is a type of ABCD trading pattern. Usually, it implies a trend continuation after a reversal. In the following paragraphs, we are going to explain the Gartley variation of the ABCD setup and how you may use it for trading.

There are bullish and bearish Gartley patterns that differ with the price movements from X to A. However, both setups consider the general rules. 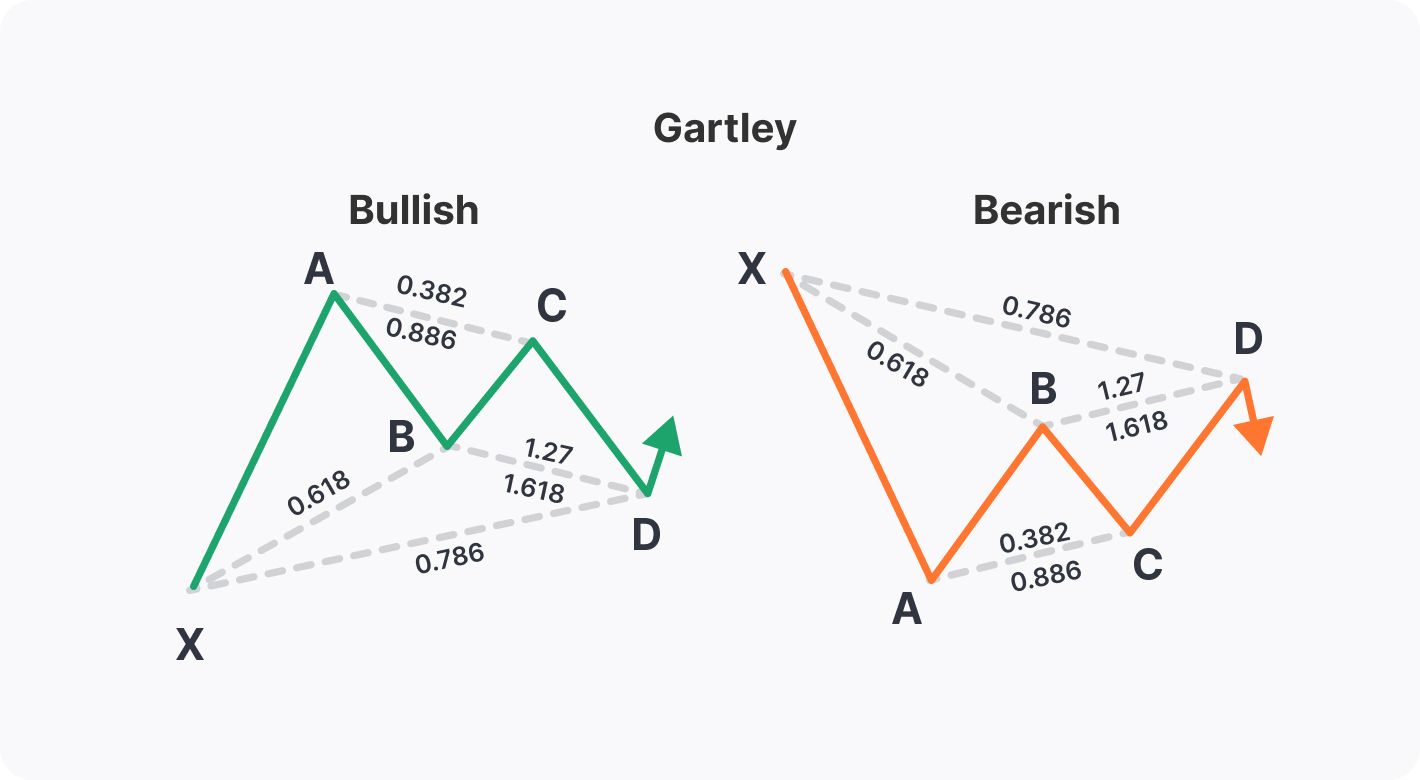 The Fibonacci ratios and levels between these points are what distinguish the Gartley from other harmonic formations.

Considering that the Gartley is one of the variations of the harmonic setups, let's see how we can identify it specifically. We are going to apply rules and outlined Fibonacci ratios between the points in order to do so. The rules to identify the Gartley setup are:

Now let's look at some of the live charts from TickTrader and try to identify a Gartley pattern on Forex.

On January 10th, 2023, EUR started increasing again after a period of consolidation and rose from 1.071 to 1.0795. We label this upward swing the XA leg. Then we measure the retracement of the next descending move and as it comes to 0.618 of the AB, so we validate our point B. 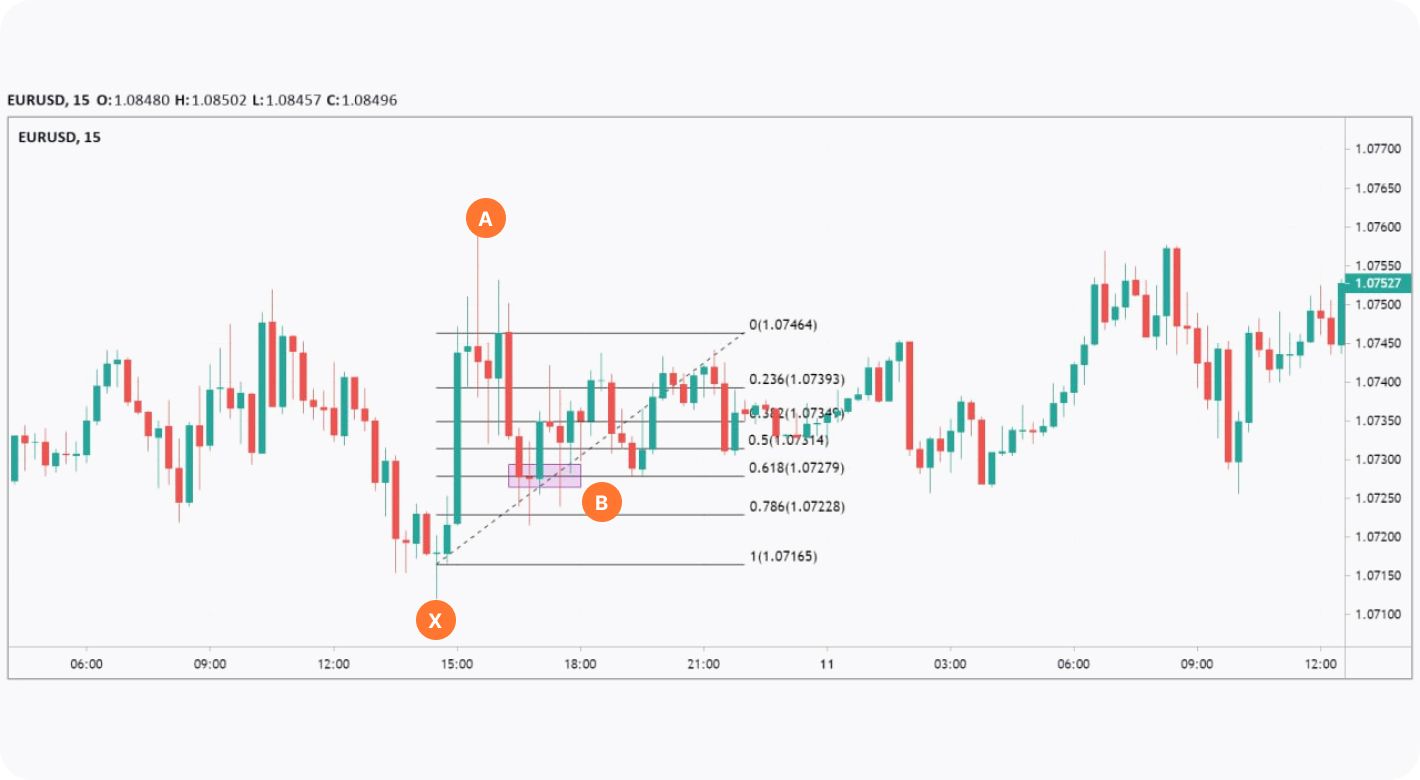 Next, we measure the Fibonacci retracement from the AB length to the next swing high in order to find point C. The 15-minute chart below shows that the point C comes between the 0.786 and the 0.886 Fib retracement level. 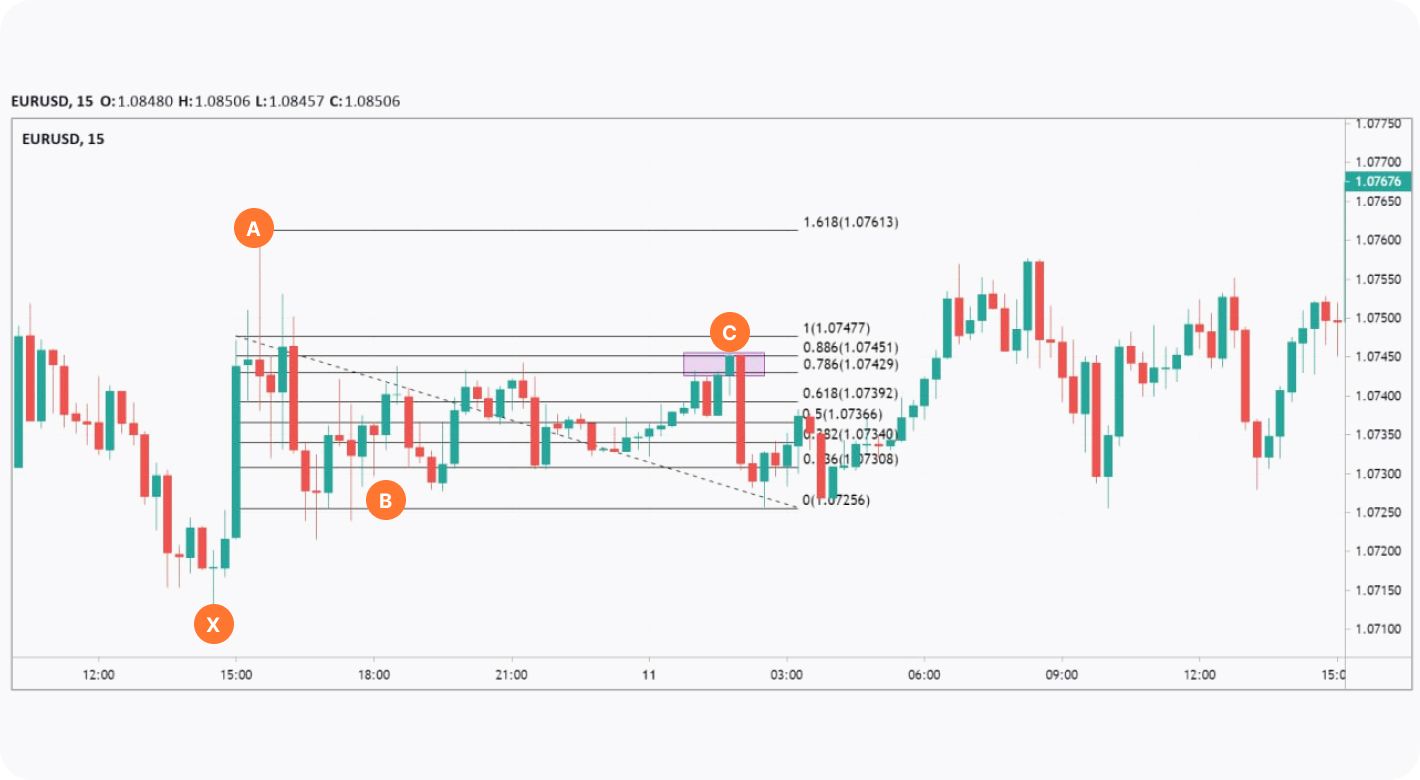 Now, all that’s left to do is to identify point D as a 61.8% or 78.6% retracement of the AX length. This was an example of a bullish Gartley. 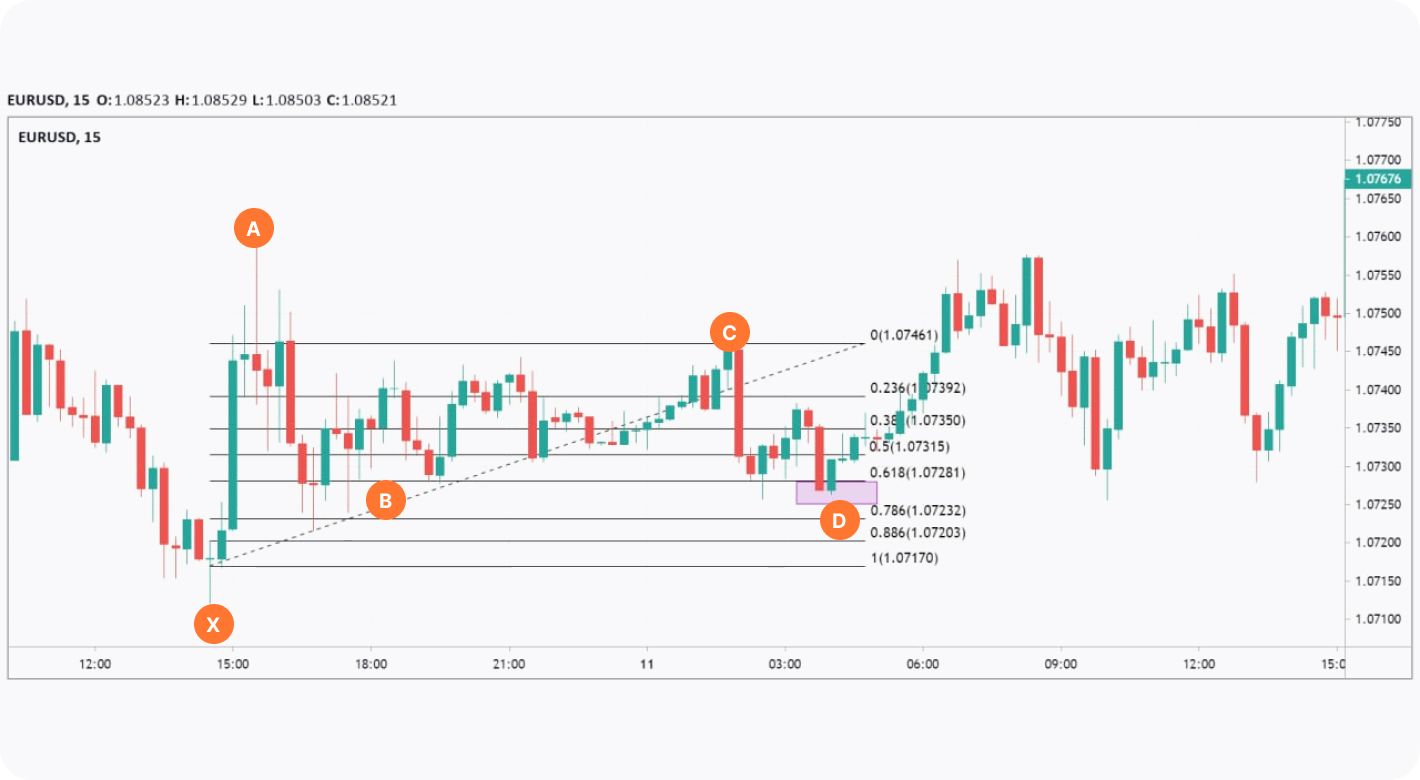 How to Trade the Gartley

Now that we have identified the Gartley formation on a price chart, we will consider how we could open real trades.

The Gartley pattern rules mean entering the market at around D. A stop-loss level may be placed below D in a bullish formation or above D in a bearish formation on either some of the Fibonacci levels or at the X at maximum. The take-profit target varies. Traders may set it on C in a conservative approach or on a higher high compared to swing A since a trend is expected to continue. A riskier approach is to place the take-profit order at Fibonacci levels above a higher high after point A.

Using these rules we come up with the long position shown on the chart below. 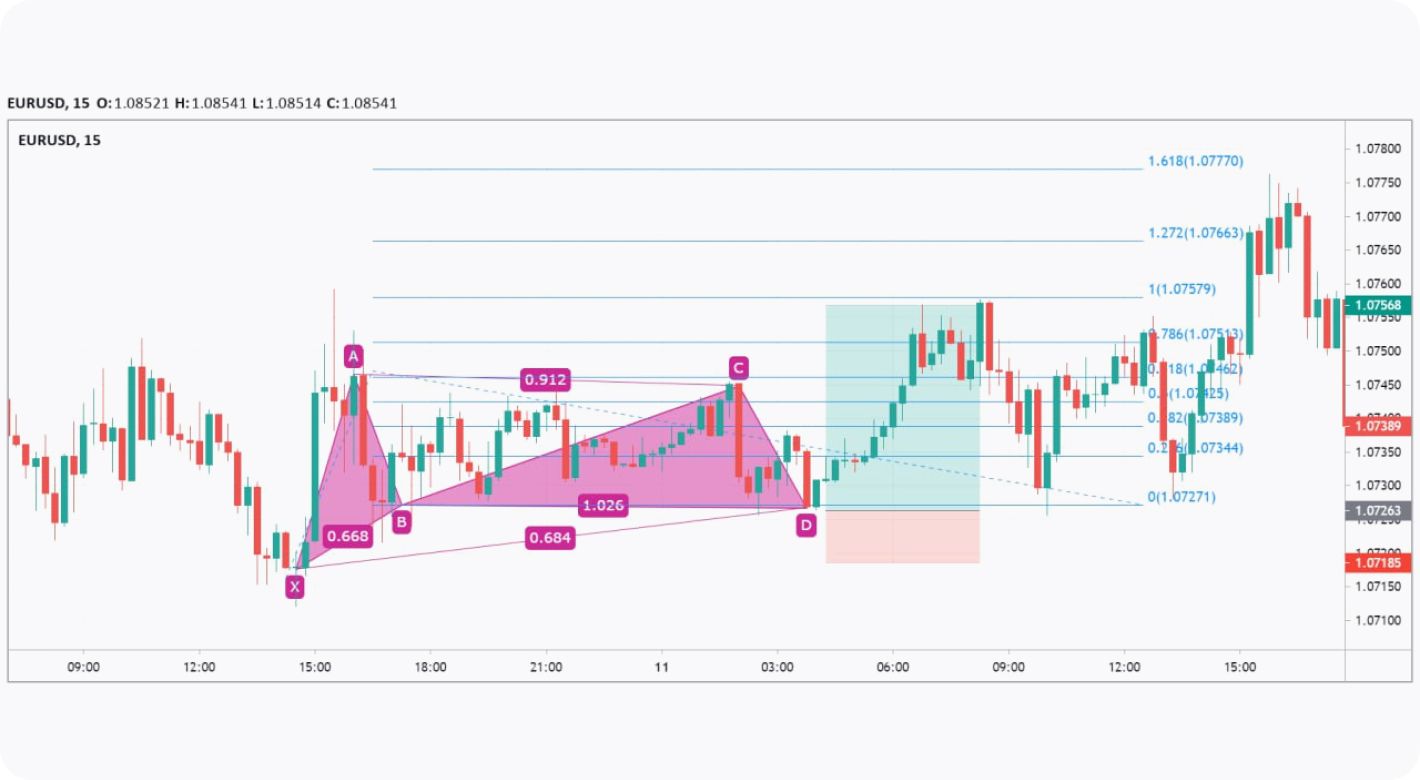 If we are expecting an uptrend, the next move to the upside could have greater momentum which is why our target could be at the 1.618 Fibonacci extension of the XA length, coming up with a RR of 6.28. 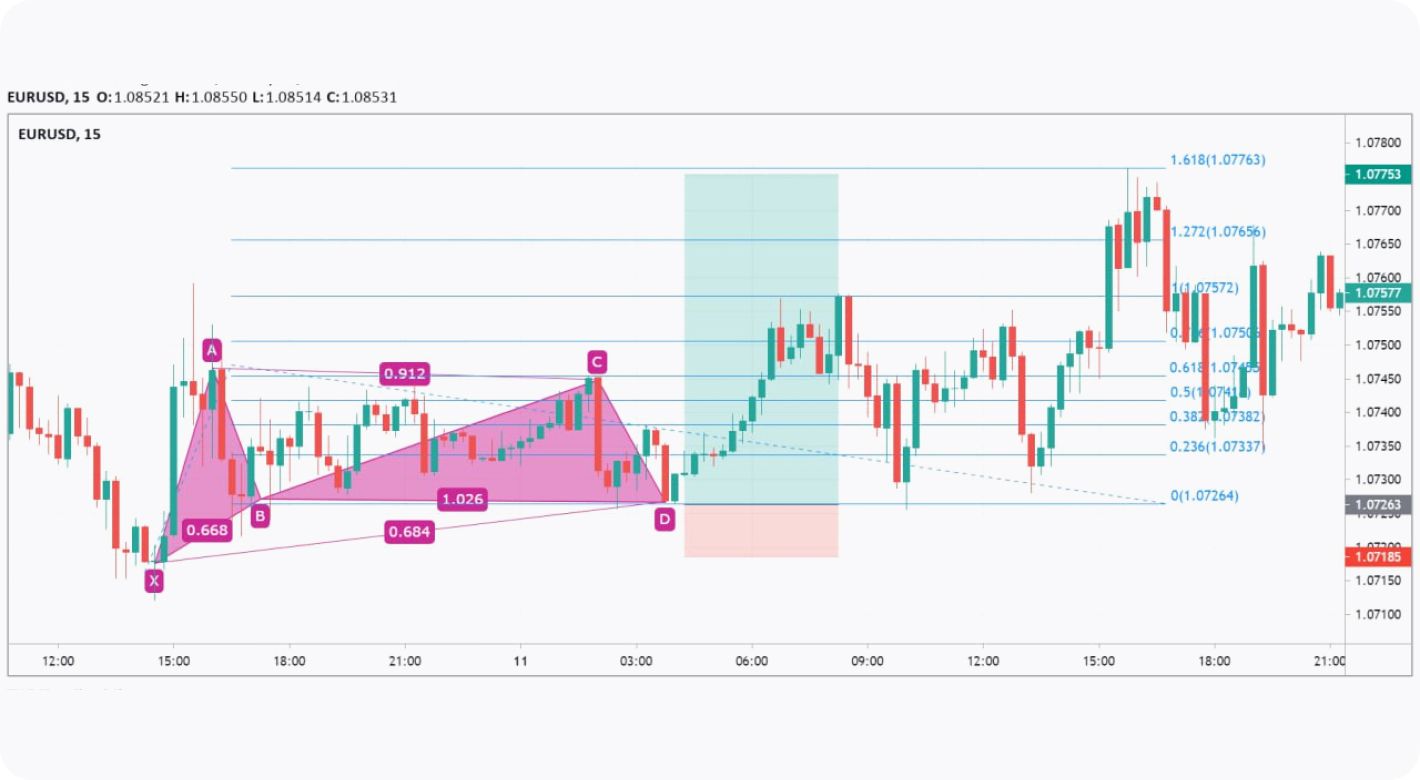 Having a wide range of trading tools and strategies at your disposal may increase your trading success rate. Although harmonic patterns seem complicated, they are common trading tools. To become better in harmonic trading, you may practise on a demo account. Once you feel ready, you may start trading with it on a live account.